Want to earn higher wages and have good job prospects?

You may be better off looking at vocational education than a university degree. New research from McCrindle, commissioned by the Skilling Australia Foundation which advocates for vocational education and training, finds that much of people’s perceptions of the sector has little basis in reality.

“Sandwiched between debates about university deregulation and private vs public school funding, vocational education all too often is relegated to forgotten child status,” Skilling Australia’s chief executive Nicholas Wyman says. The report finds four in five parents would prefer their children go to university after school over pursuing vocational education. But by sticking to this aspiration, they may be unnecessarily limiting their child’s potential.

While nearly half of Australians think VET is no longer as relevant as university, government figures indicate nine of the top 10 occupations predicted to have the most jobs growth are in vocational training areas. The report, released on Monday, finds that conversely to widespread beliefs: * The median full-time income for a VET graduate is $56,000 vs $54,000 for a someone with a bachelor degree; * nearly eight in 10 VET graduates have a job soon after training, vs about seven in 10 university graduates; and * more than nine in 10 trade apprentices have jobs after finishing training. It notes that at the same time as Australia has an unusually high underemployment rate, more than a third of occupations were reporting labour shortages.

The report also points out the government expects more than one-fifth of HELP loans to university students will never be repaid because graduates don’t earn enough. “Unfortunately, vocational study has a history of being seen as less respectable than attending university. This must change,” Mr Wyman said. An array of respectable, upwardly-mobile careers were possible in growing sectors like healthcare, biotech, cyber security, agriculture, tourism and hospitality that don’t require university education.

“Political and business leaders often bemoan Australia’s perennial social and economic problems, but it is clear the VET sector can play a significant role in resolving them.” 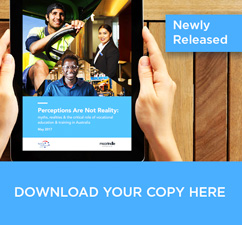