A love of cars drove Charlotte Graham towards a career as a mechanic. But nearly three years into her apprenticeship, the coronavirus pandemic has put her life on hold.

“I was stood down at the start of last month and everything just changed, as soon as that happened my life just imploded upon itself,” she said.

“I feel kind of defeated, it’s quite heartbreaking really when you put so much into it.”

Ms Graham works at a car dealership in Brisbane but is employed by group training organisation WPC Group, which connects apprentices with host employers.

She is eligible for the Federal Government’s JobKeeper wage subsidy of $1,500 per fortnight and is hopeful of returning to work once the crisis passes and business picks up.

For many others through, the future is less certain.

WPC Group general manager Andrew Sezonov said 150 apprentices across sectors such as automotive and hospitality had been sent back to the organisation by employers who could no longer keep them on.

“Apprentices particularly are vulnerable to this economic shock,” he said.

“As less experienced members of the workforce they’re often sadly the first to go and if past history is a guide, the last to be re-hired.

“We’ve seen apprentices let go, stood down at levels I’ve never seen in my 24 years in this industry.”

As well as the immediate impact on existing apprentices, there are concerns about the longer-term effects on training across the country.

Analysis by the Global Apprentice Network Australia showed the number of advertised apprenticeship positions fell by 73 per cent between January and April this year.

“We normally see the peak interest from that sort of November to March-April period each year, that’s the sort of traditional employment cycle,” GAN Australia executive director Gary Workman said.

“But we’ve certainly seen a massive downturn in that over the past couple of months, predominantly due to COVID-19.”

“It’s still a little bit too early to tell exactly how this is going to affect apprentices on the whole, it takes about six months for these figures to come through,” he said.

“However, it is a very big problem, apprenticeships take about three to four years so if there’s an impact now it affects the pipeline of apprentices, it means we have long lasting impacts that can take years to work their way through the system.”

Concerns young people will be deterred from training

Vavine Skilbeck has spent the past two years training to become a chef but was recently been stood down from a Perth restaurant.

“Pretty disheartening, you know you work really hard as an apprentice and especially in the cheffing industry,” she said.

Ms Skilbeck is also eligible for the JobKeeper subsidy but she is worried about the future of the hospitality industry and is now thinking about studying nursing instead.

“Even if they open restaurants in the next couple of weeks and they try to get normality back there, with the lack of tourists that Australia’s going to have, and no apprentices getting hired, in the long-term, like five years, the industry is going to be lacking even more chefs because so many people are in my position and we’re going to have to change industries to be able to survive,” she said.

“[I’m] pretty sad to be honest because I really, really love the industry that I’m in.

“You don’t want to have to change industries before you’ve even had a chance to start.”

As well as JobKeeper, the Federal Government is spending $1.3 billion on a 50 per cent apprentice wage subsidy for small businesses, although employers have to choose between the two.

A spokesman for Employment Minister Michaelia Cash said more than $70 million had been paid out so far under that program to support more than 15,000 apprentices and trainees.

“The Australian Government is committed to seeing more apprentices and trainees helping to grow Australia’s economy, particularly during the current COVID-19 pandemic,” a statement said.

“As the economic impact of COVID-19 is realised the Government will monitor what additional assistance may be necessary.”

Ian Curry from the Australian Manufacturing Workers Union said both measures were a good start but he called on the Government to go further to keep people in work.

“It may not be enough, it’s incredibly important that we maintain the employment of all of the apprentices and trainees that are in the system. We’ll need those skilled workers when the recovery comes,” he said.

“It would be a very sad thing if they were to become statistics in terms of non-completion, we already have an issue with non-completion in Australia.” 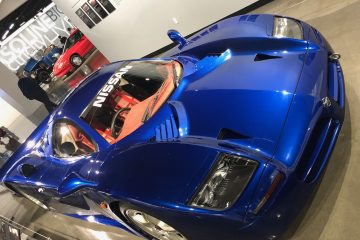 How beautiful is this Nissan R390 GT1?

Built in Japan, it was designed to race under the grand touring style rules; regulations for the GT1 class at the 24 Hours of Le Mans required Nissan to build a road-going version. This is Read more…