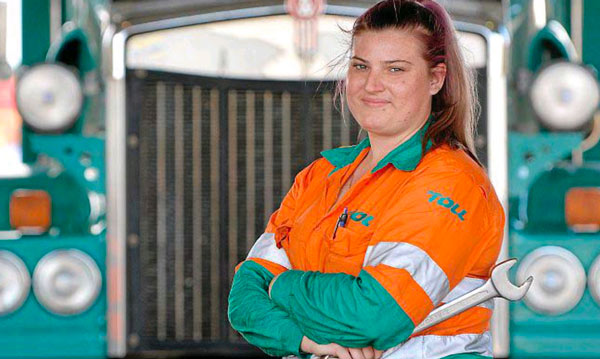 Kellie Pitts, 23, is the first female in Queensland to complete her heavy vehicle apprenticeship with Toll, and they’re proud of it.
She has been rewarded with a full time job with the company.

Originally from Sarina, Ms Pitts followed her brother Trevor, who was practising in the trade, into the industry.
“He was the first one in it, I actu­ally wanted to be a boiler maker in the beginning,” she said.
“I ended up coming across this and decided to give it a go.

“I loved it and went for the inter­view, got the job and started working with them a week later.”
After four years of intensive training, Ms Pitts said she was both thrilled and relieved to have finally finished her apprenticeship and to have secured a role as a diesel fitter with Toll in Mackay.

“It’s a great feeling,” she said. “My family was overwhelmed and excited too, my mum actually cried when she heard the news.

“I’m looking forward to the job and seeing what the future holds.”
According to Ms Pitts, working in a male dominated industry can be difficult at times, but she didn’t let the doubts often cast upon her, get in the way of her goal. “It can be tough being the only female,” she said.

”You definitely get the feeling sometimes that people don’t think you can do it, but you have to prove them wrong.
“Normally they’re pleasantly sur­prised once they see what you can do.”

Toll regional manager of Far North Queensland Tim Frey said Ms Pitts was the best apprentice Toll had ever brought through regional Queensland, and he often had em­ployers asking to have her back. “She’s exceptional,” Mr Frey said.
“She applied herself to the posi­tion, and went ahead in leaps and bounds to finish all her studies.
“She did some work in Rock­hampton and Gladstone and quali­fied mechanics there were asking if they could get her to come work with them because ‘gee she did some great work’.”

On Tuesday, Ms Pitts was awarded her apprenticeship certifi­cate of completion by Mr Frey, along with administration manager Carol Meyers and state manager for WPC Group Janine McPhee.